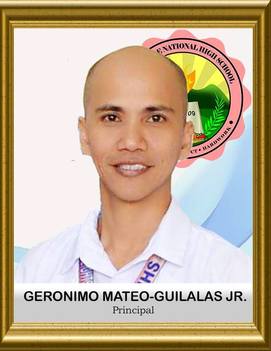 "If it's by God's will...no one in the world can interfere!", "No matter how difficult the tribulations were...with God's grace...I will stand still", this is a living philosophy that the father of this institution uphold.  A perspective that guides him as he continue his journey in all the walks of life.

April 2017, Graceville National High School was very fortunate to be blessed with a new leader in the person of Sir Geronimo Mateo Guilalas Jr. A man who is not just a FATHER to us but a man full of vision...infinite in creating change and bringing hope to every Gracevillian individual through education, genuine service and commitment.

Sir Jun believe that HUMAN STATUS is not a hindrance in reaching ones dream and that EDUCATION and FAITH is the GREATER BRIDGE towards its realization.  For him being poor is not a disadvantage but a strength to have a positive outlook in life to surpass all obstacles in the life.  He lost his father at a very young age but manage to finish his education and be a professional.  He studied at Bulac Elementary School (now Miguel M. Cruz Memorial School) from 1980- 1986.  His Secondary Education was from Sapang Palay National High School from 1986-1990.  To some, graduating from high school would be not be easy particularly if you have financial difficulties, but our principal have proven that     nothing is impossible to someone who is patient and committed to his dream.  To finish college he experienced being a barker, car washer, and run errands for his relatives just to earn money and continue his studies in college.  And at long last his effort were rewarded for he graduated college in 1994 at Philippine Normal University with the course Bachelor of Secondary Education Major in Mathematics and became a professional licensed teacher on the same year.  Learning is a continuous process , one should always abreast himself to new ideas, and so he continue his Masteral Studies until such time that he obtained his Certification of Academic Requirements (CAR) at Bulacan State University by year 2007.

"To TEACH..To LOVE...and be LOVED ", is also his guiding CREDO as an educator.  Being a teacher is not just a career but a COVENANT framed with genuine service and love for his students, community, and his country. Before reaching his position at present he was given an opportunity to teach at Grace Learning Center (now Grace Christian Academy) from 1994 -1995, Little Angels Montessori School (1995-1996). Until he decided to venture teaching in public school by year 1996 at Bulac Elementary School.  He also taught at San Jose Del Monte but as contractual by June 2, 1997 and finally earn his permanency on December 20, 2000.

HARD WORK is a value that our principal possessed and so by 2009 he obtained the new position of Head Teacher 2 and because of innate skills and being philosophically positivist with deep faith in God, he was given the chance to be an Officer In-Charge of San Jose del Monte Heights High School by year 2016. In April 22, 2017 he was granted the rank of Principal 1.

For our Principal, in life there is no such thing as INSTANT and one has to endure the goose and bumps of the road..the people who do not believe in him or may have doubts in him...the unending guidelines being implemented and the stigma embedded in the system.  All these seems to cripple our leader but in the end according to him, "with God's grace what has been planned will come into reality".

April 2017 at GNHS his new journey as a Principal 1 have began.  With his new VISION, new COMMUNITY, and truly a new FAMILY...fully a TRANSFORMATION!

Being at GNHS, for him is unquestionably because of grace.  He was placed in an institution because God believe that he can also be an instrument of CHANGE for its betterment.

​Currently, the entire GNHS is still adjusting with the new leader but continuously learning and journeying HAND IN HAND with SIR GERONIMO MATEO GUILALAS JR. with the greatest endeavor and that is TO TEACH OUR STUDENTS, TO IMPART TO THEM VALUES AND LESSONS IN LIFE THAT THEY MAY USE AS THEIR OWN BRIDGE IN REACHING THEIR OWN DREAMS and we can proudly claim that "IT IS BY GRACE THAT HELP US BUILD A BETTER VILLAGE!".
Powered by